<img height="1" width="1" style="display:none" src="https://www.facebook.com/tr?id=337111513811540&ev=PageView&noscript=1" /> How Monsanto/Bayer Is Contributing to the COVID Shutdowns and Global Economic Crisis - Moms Across America

As reported by GMWatch - A new study conducted by an international team of scientists based in London, France, Italy, and the Netherlands, led by Dr. Michael Antoniou of King’s College London, was published today in the journal Environmental Health Perspectives.

“The study is the first to describe a mechanism by which glyphosate and Roundup affect the function of the gut microbiome (bacterial populations and biochemical function) in rats, which are the standard model that regulators use for assessing the human health risks of chemicals. The pesticide interfered in a potentially worrisome way with the shikimate biochemical pathway of the gut bacteria of the animals used in the experiment. That interference was highlighted by changes in specific substances in the gut.

Moreover, by measuring molecular composition profiles in the blood and gut, the new study also showed that the Roundup formulation tested (MON 52276, marketed as Roundup BioFlow) was more disruptive than glyphosate alone. Rats consuming this Roundup formulation developed signs of oxidative (reactive oxygen) stress in their blood, which was not as evident with glyphosate alone.

This is a concern as oxidative stress can not only damage cells and organs, but also DNA, which can lead to serious disease such as cancer.”

“This is a first step,” said a scientist on the team, Robin Mesnage, regarding in showing the marker of how glyphosate has an effect on the microbiome and how a “safe” daily dose could be harming humans in an interview with Carey Gillam.

Moms Across America has seen these steps’ progression years ago and has been alerting our hundreds of thousands of supporters and followers. Numerous studies have indicated gut bacteria disruption by glyphosate which was patented as an anti-parasitic agent /anti-biotic in 2003, but this is the first to show how the disruptive function occurs in animals, through the shikimate pathway of the gut bacteria. 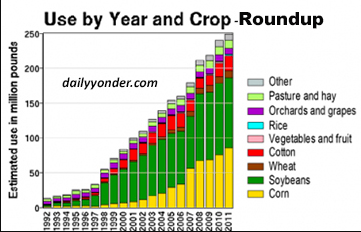 Critics have often claimed that Moms Across America is anti-science and anti-reality. The fact is that we receive, review, and report the science from independent scientists. The people who fund the critics and their allies in the universities do not like what we do. Proponents of industrial agriculture, including many media moguls, politicians and federal regulators, do not want to disturb the profitability of the chemical manufacturers who fund them. The current situation is unacceptable to us as well as millions of people. We cannot let the chemical companies’ profits be a higher priority than our families’ health or our nation’s security.

In our country, millions of businesses, schools, and establishments are shut down right now due to the death rates of COVID. These death rates are reportedly higher due to the high rates of diabetes, obesity, and weakened immune systems in America. The rates of diabetes, obesity, and weakened immune systems are now, with this study and others, more clearly connected to glyphosate herbicides, the most widely used herbicide in the world. According to the EPA, over 300 million pounds of glyphosate are used in the USA every year, 280 million pounds on our food supply, both as a weedkiller and drying agent on crops such as grains, wheat, peas, beans, corn, sugar, soy, etc. before harvest. According to thousands of food sample tests conducted by numerous organizations, including the FDA, most Americans consume multiple doses of considerable glyphosate residues with every meal if they are not eating organic.

It is important to note that this new study confirms that levels of glyphosate and glyphosate herbicides, which have been deemed “safe” by the FDA for daily consumption, are harmful to the gut microbiota.

“We find higher levels of glyphosate in the urine of Americans than probably anywhere else in the world,” said Michael Antoniou.

We also find higher rates of diabetes and obesity in America, leading to increased health care costs, increased severity, and increased death rates by COVID-19, leading to longer shutdowns. Across the country and around the world, the shutdowns are causing higher rates of poverty, homelessness, addiction, suicides. The connection between increased COVID symptoms and death and this immune system weakening herbicide, which is heavily promoted by Bayer/Monsanto, can no longer be ignored.

Regarding the connection between COVID-19 deaths and damage to the gut bacteria by glyphosate, Antoniou stated (summarized for brevity), “If there is an imbalance in the microbiome... then this could lead to an impairment of good immune system function. Anything that compromises immune function means the immune system is not going to have the strength to react appropriately to any infection, including Sar COVID-19. We cannot ignore the role of the gut in this area.”

Antoniou asserts that this work is “flagging, highlighting yet again how regulators need to come into the 21st century, stop dragging their feet and embrace the types of analysis that we have done in this study.” The EPA is currently considering renewing the license for glyphosate despite the fact that Monsanto has lost losing numerous lawsuits on glyphosate and cancer.

To summarize Antionou’s final words in the interview, “While there are still unknowns... until we have clear answers, then I think it is only wise that people minimize their exposure to this and other pesticides. My recommendation, always is that people eat organic because we know organic has far, far lower levels of these pesticide residues. Let’s protect our loved ones by favoring an organic diet as much as possible.”

Moms Across America agrees with this sound advice; however, an increasing number of people cannot afford organic due to the shutdown. For years, we have been calling on policymakers to ban glyphosate and make the entire food supply safer for all. We assert that the first step in fixing our health crisis is to ban glyphosate sales and support regenerative organic farming. We, as a nation, can no longer afford to allow an immune-system weakening chemical in our food supply. The least we can do is remove this factor. 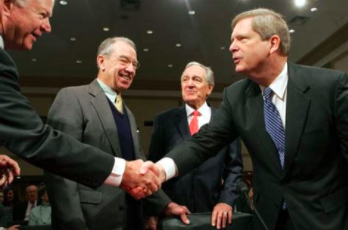 However, Tom Vilsack, the Biden appointee for the USDA head, is a well-known supporter of GMOs and related toxic chemicals such as glyphosate. If he is appointed, we can expect he will heavily promote the use of these toxins and GMOs, thereby further weakening our nation’s health and security.

We urge the public to ask their representatives and senators to vote NO to his appointment before the 2月 2, 2021 hearing. Whoever is appointed to USDA, we will hold them accountable for regulating companies like Bayer and push for a full ban.

Moms Across America is a 501c3 nonprofit organization whose mission is to educate and empower mothers and others with actions and solutions to create healthy communities.