Protecting the city from serious and costly lawsuits from residents

This Works: How You Can Tame 4G/5G Wireless in Your City - 2 minute Summary

For extended video version scroll to the bottom of this page.

This document will explain:

The following information applies to any City, whether or not they have issued permits or master license agreements with Telecoms

Correct insurance covers all liabilities that can be generated by a device installed in a city or on private property,

such as cell towers, which emit Radio Frequency (RF), a recognized health hazard. Since a city may not reject the installation of cell towers purely for health reasons, it is crucial to obtain complete third party coverage for injury to the health of the city’s residents. General Liability Insurance may be required as part of a use permit or as a condition of any Master license agreement for the deployment of technology.

This type of health issuance is called “Pollution Insurance”. Most General Liability Insurance policies have a ‘pollution exclusion’ (Under this exclusion, EMF /RF are listed as pollutants). The city must demand that any permit of any kind allowing a Telecom to install cell towers or related equipment in the city must include this specific pollution coverage in the license agreement.  This insurance must be obtained from a licensed third party insurance company, not a self insured indemnity substitute by the Telecom or any company listed on the License Agreement. In the event that a master license or permit exists between the City and a Telecom, the City must examine the insurance provisions carefully and will find that Pollution insurance is not covered. The city should demand a copy of the actual third party insurance policy relating to the permit, and inform the Telecom that it is in breach of the permit until such time as proper Pollution insurance is obtained. All further installations will cease. 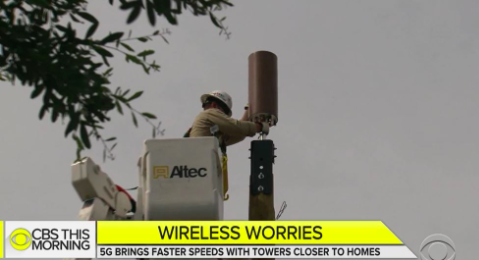 To protect the health and wellbeing of their citizens, and to avoid possible lawsuits by such citizens against the city and/or employees or council, the city must reject any offer of self-insurance or indemnity made by the installing company as not sufficient. Due to the well established (thousands of studies) fact that RF is a hazard, as stated by the major insurance companies such as Lloyds and Swiss RE, they do not offer pollution insurance for RF under any circumstances. See quote from Lloyd’s agent below, followed by AT&T exclusions to their user policy:

The Electromagnetic Fields Exclusion (Exclusion 32) is a General Insurance Exclusion and is applied across the market as standard. The purpose of the exclusion is to exclude cover for illnesses caused by continuous long-term non-ionizing radiation exposure i.e. through mobile phone usage.” CFC Underwriting LTD in London, the UK agent for Lloyd’s.

Every cell phone company defines electromagnetic fields, microwaves, and all artificially-produced non-ionizing radiation as “pollutants” and refuses to cover the phone for damages from such pollutants.

It is not only acceptable, but crucial, that the City deal with the health issues of RF pollution, and they may do so in discussion with the Telecom when the subject is proper insurance. This is not the same as rejecting the installation for health issues alone, (47 US Code 332C, the Telecommunications Act 1996 ) without dealing with pollution insurance.

The City can simply state they are: (a) protecting the health of the citizens from a known hazard, and (b) avoiding any liability from lawsuits that may develop from any parties who claim injury from RF towers.

Since neither the City nor the Telecom is able to obtain the proper Pollution Insurance from third-party companies, Telecom will attempt to offer other forms of insurance without the pollution clause or will offer indemnity (self-insurance). This indemnity will not be offered directly by the Telecom (AT&T or Verizon, etc), but rather by another company which will be installing the equipment (LLCs such as GTE, New Cingular, etc) and which may be listed as “dba Verizon” or “dba AT&T”. The Telecoms are well aware that RF is a known hazard and admit this fact to their shareholders in annual reports and also as shown in their own insurance exclusions to their customers. Therefore third party insurance is the only way to insure proper handling of this issue.

Telecom lawyers will threaten to sue the City if they do not agree to the permit with the lack of pollution insurance, and will falsely assert that they will win large sums of money and legal fees from the City. Below you will find the proof that a Telecom cannot collect any monetary reward or legal fees if they prevail in a court, only the permission to install the equipment under the license. It is doubtful that they will sue, because Pollution insurance for the city is part of any proper general liability insurance that all cities must demand, and this is a basic right of a city to protect itself from lawsuits from citizens claiming harm from the RF towers, which can literally bankrupt the City. Cities must stand up to any such legal threats as they are essentially without teeth.

A City Council may not be held liable for denying a permit:

Government code § 818.2. Adoption or failure to adopt or enforce enactment

A public entity is not liable for an injury caused by adopting or failing to adopt an enactment or by failing to enforce any law. However, where the City requires liability Insurance for a known risk (EMF illness) the city can be sued for damages if it fails to require coverage for such risk. If the City ignores the fact that the policy has a pollution exclusion for EMF illness, it can be sued by an injured third party. Cal Govt. Code 815.6 and 815.2 See also 51 Cal App 3d 577 , and 18 Cal 3d 901

A Telecom Company cannot sue a City for Damages for violating the Telecommunications Act; all it may recover is an injunction to issue a permit.

“We hold that Kay's three dismissed claims are barred by claim preclusion, that the City is immune from damages under California law, and that § 332 of the TCA does not provide a damages remedy.”

Not only will a Telecom company be unable to sue a City for money damages, even if they win a lawsuit against a City, and get an Order to issue a permit, they are not allowed to get Attorney fees.

“Section 1983 remedies, including the right to attorney fees for the prevailing party under § 1988, are unavailable in a suit to enforce rights granted by Telecommunications Act; Act's conferral of right to sue is presumed to entitle a successful plaintiff to usual remedies, which do not include attorney fees.”  PrimeCo Personal Communications, Ltd. Partnership v. City of Mequon, C.A.7 (Wis.) 2003, 352 F.3d 1147.

This Works: How You Can Tame 4G/5G Wireless in Your City - Full 20 minute Version