Once upon a time, just one generation ago, all food was organic. When a mother bought corn on the cob or apples for her family she had no doubt that she was buying healthy food. When she picked up a box of cereal she didn't bother to read the label because she trusted that it has passed the food regulations set forth by our FDA and USDA and that anything sold in the grocery stores was perfectly fine to eat. Sometimes she read the label because she was avoiding too much sugar or salt, but besides that, the long looking words she couldn't pronounce she didn't think twice about. They must be fine.
She never even considered that there could be something in the food that was not labeled. She never imagined that the food manufacturers would be allowed to do such a thing. It never occured to her.
Over the past twenty years, it has become apparent that there is something in the food that is not disclosed: genetically modified proteins, put in our food since 1994, which are engineered to withstand toxic chemicals. GMOs have been hidden from us.
Many resist this idea. They don't want to know. It would unAmerican to not trust the system. Plus, it would be inconvenient. Suddenly, if we want to avoid these genetically modified organisms we would have to scrutinize our food, change food brands that have become family traditions, budget and spend more to buy NON GMO Project verified and Organic and be suspected as a left wing hippy conspiracy theorist.
This is the reality that brave Americans are willing to face. It is not a reality that our representatives and committee members of the Energy and Commerce Hearing faced in the hearing for HR 4432 which would make GMO labeling voluntary on a federal level, wipe out state labeling laws, and allow a "100% Natural" label to contain GMOs.

Busloads of people at the Rayburn House   Alexis of OCA,Rally organizer 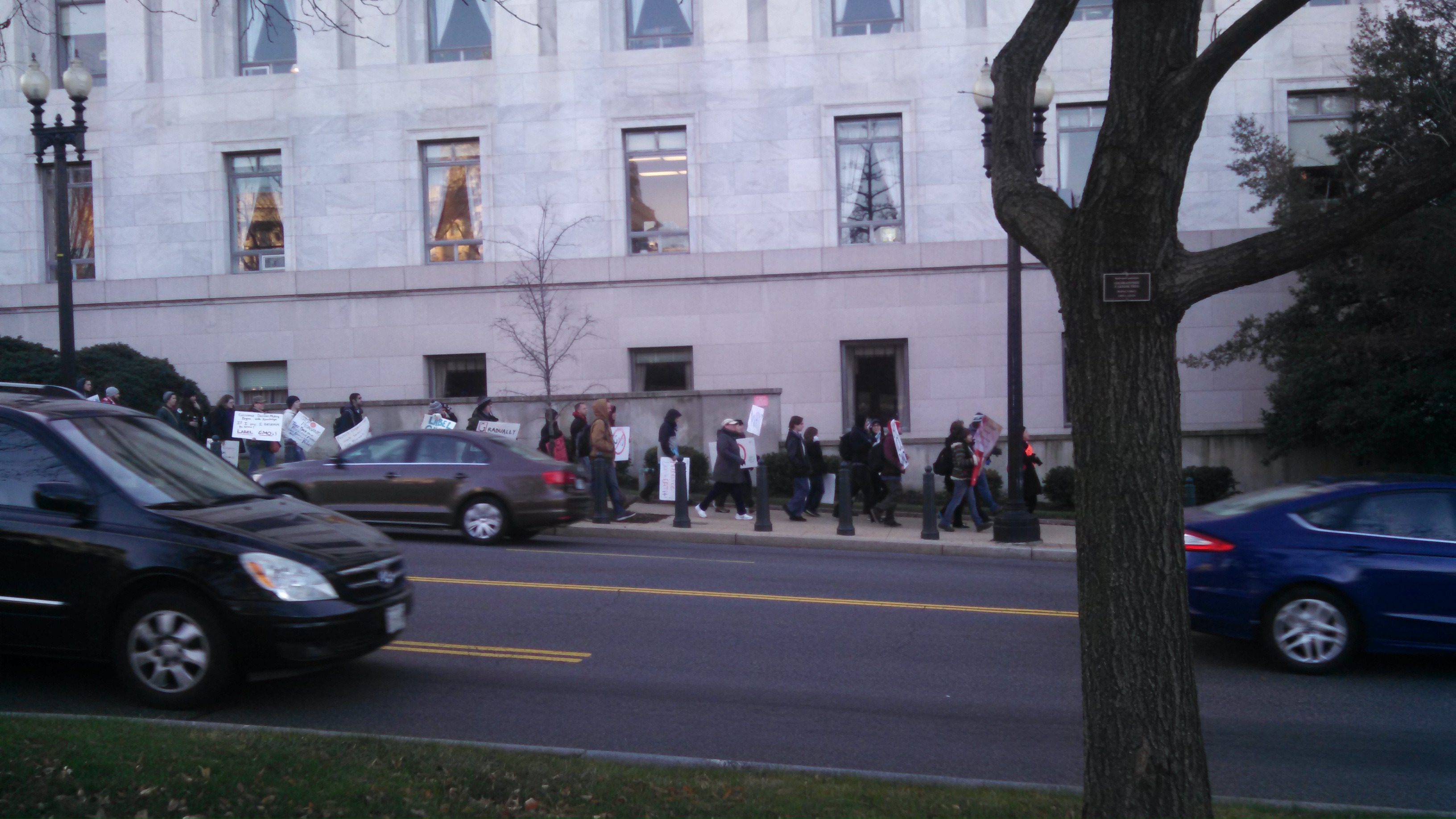 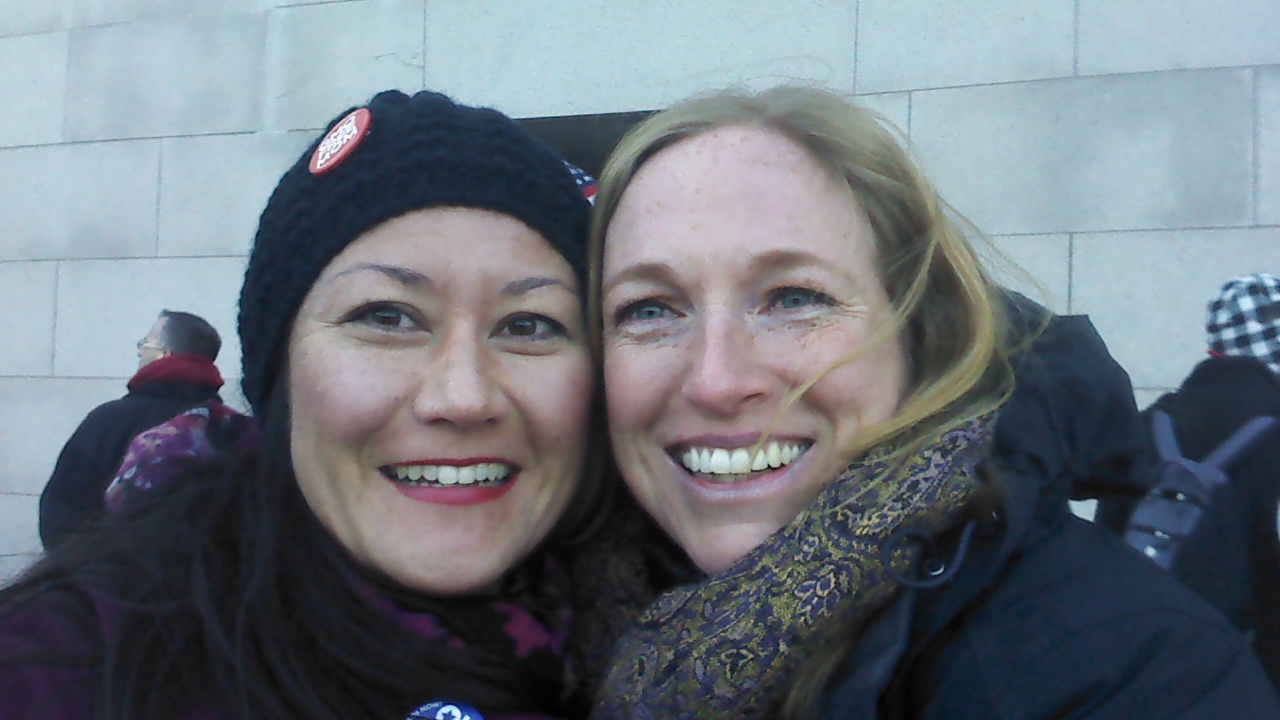 Attendees for the Energy and Commerce Hearing regarding HR 4432 or the DARK Act,
Denying American's Right to Know, came from across the country, lined the halls of the Rayburn house in Washington DC at 7 am. The Organic Consumer's Association, funded the buses to the rally and along with many other grassroots and non profit groups, rallied their supporters for weeks to rearrange their schedules, take two days off work, ride on a bus for hours to days to be at the hearing and rally to stop HR 4432. We came because we care about having integrity on our food labels, knowing what we eat and having our state rights protected. We came because we want GMOs labeled and then elminated from our food supply along with the related toxic chemicals. We came because we have seen an increase in health issues in our loved ones, and we see them get better when they avoid GMOs and eat organic. We came because we love.

Mom and girls from Michigan! 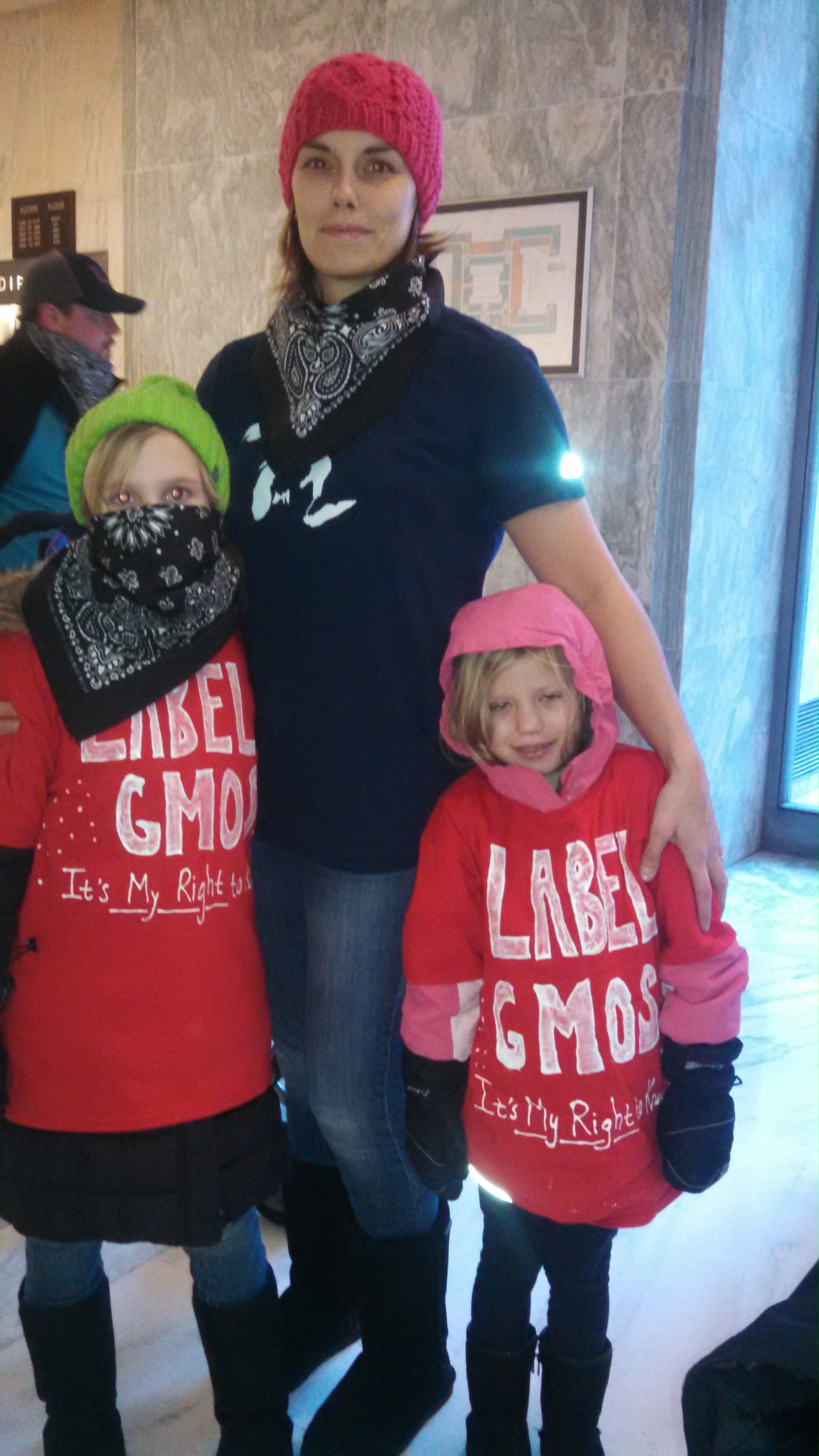 I arrived at 8 am and was told with 90 seats available I was likely to get in. The crowd gathered. I handed out our MAA flyers to people in line and was told I could not because of terrorism like Anthrax. I asked, "You mean I can't hand out pertinent
information to the hearing, as a US citizen on federal property?" "Not if you don't want to be escorted off the property right now.⁮ I am sure you don't want that."
He had no idea what I wanted.
It took everything I had not to continue to hand out the flyers. 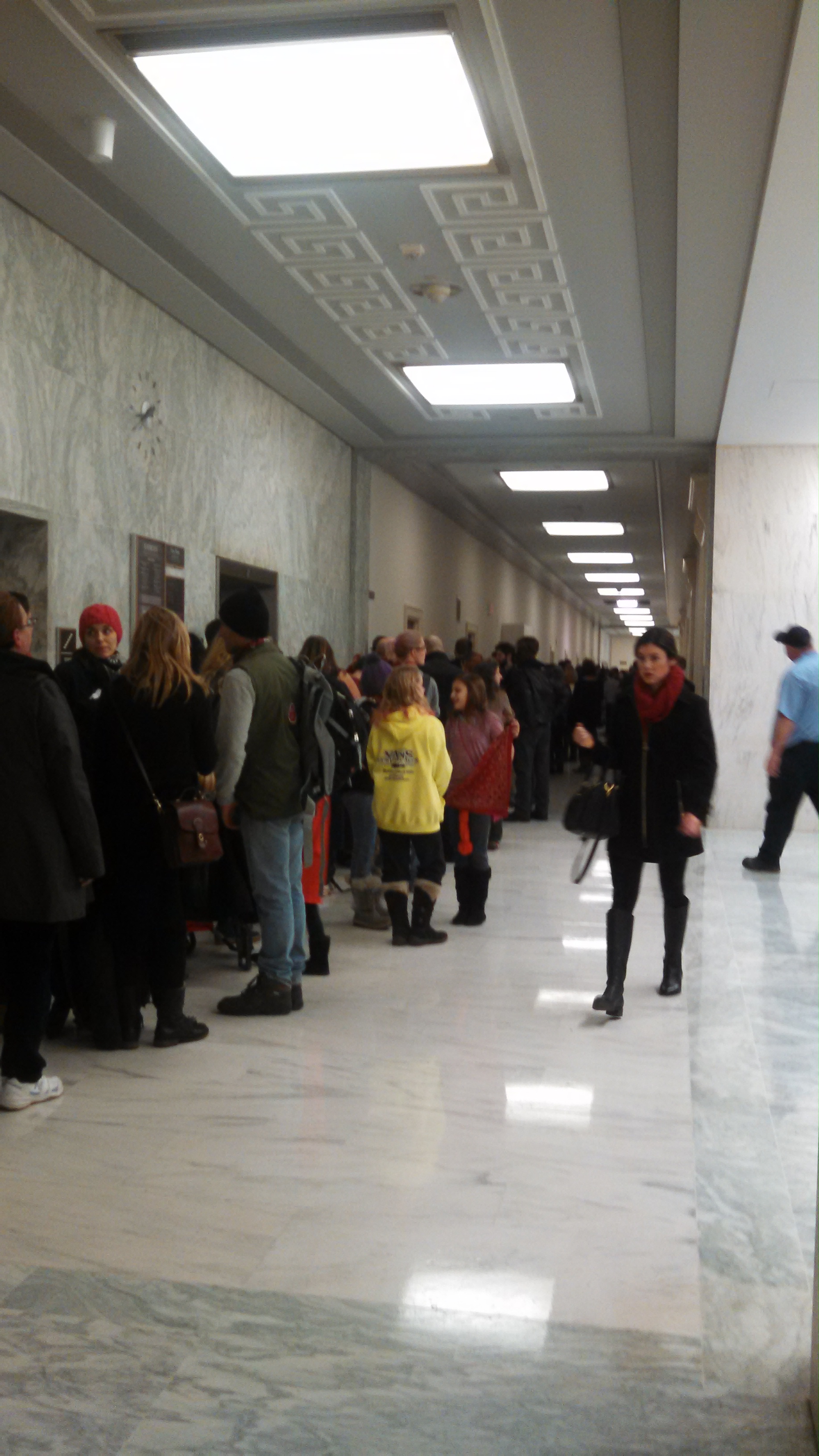 As I returned to my place in line -- fuming, I noticed a very distinctive difference between the local law students and paid sitters and the activist who traveled from more than 20 states to attend the hearing. There were at least 80 individuals in the front of the line in suits, dresses and crisp striped shirts... bored, blase and talking aimlessly... and hundreds more activist citizens in sweat shirts, hats and black and red bandanas... excited, focused and passionately intense about just getting in the doors of the hearing. They were eager to be a part of our government process. 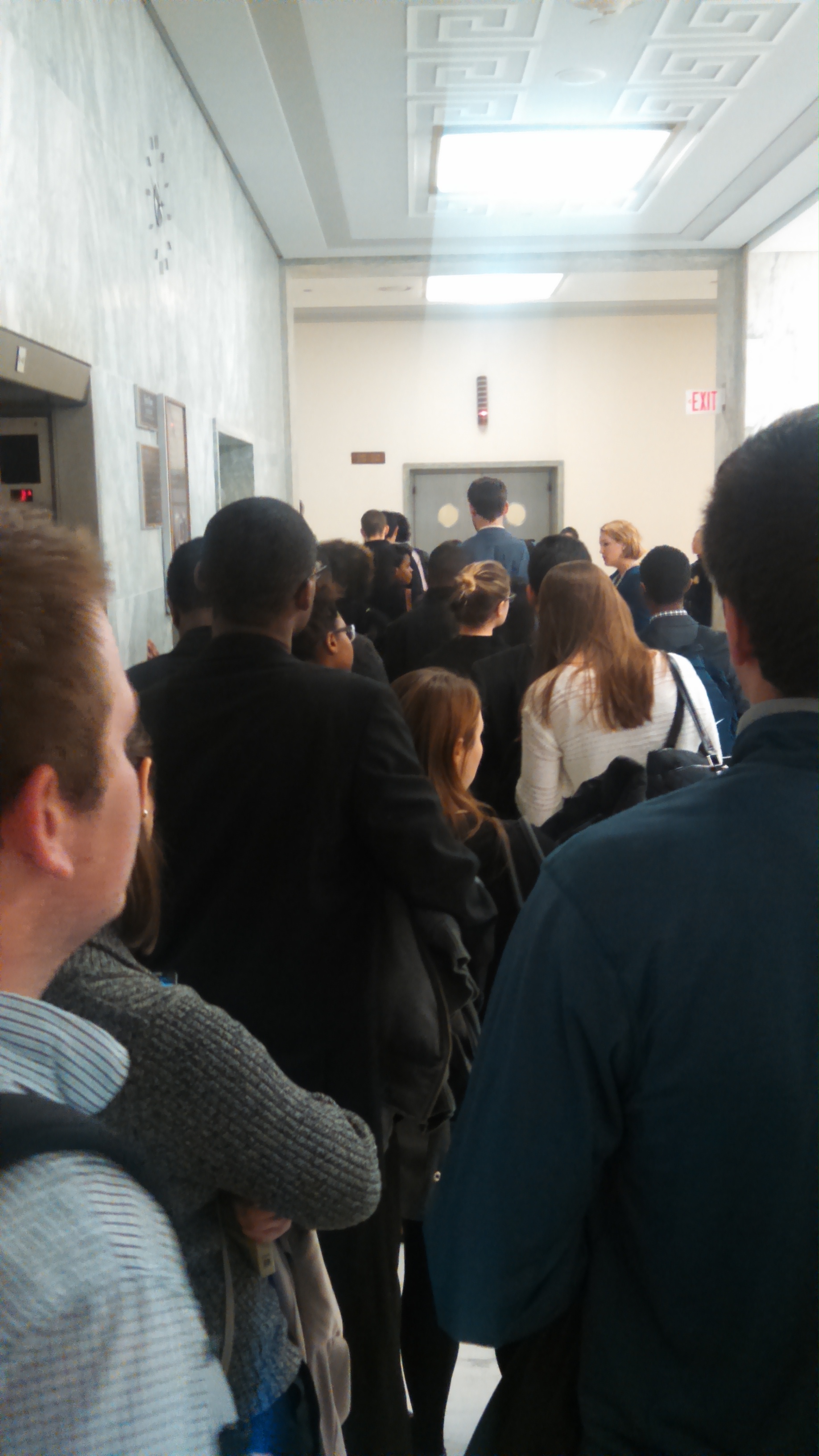 We were sorely dissapointed. Only 52 got in because the other seats were reserved. Nicole from GreenAmerica got in. A few others on the pro GMO labeling side got in. I was there from California (Thanks to Benny Olvera my sponsor)  two hours early and we were positioned 3 people away from the allotted seats but did not get in.

Groups of activists walked to the front of the line and challenged the fairness of being denied entrance.We later learned that many students were paid 40 dollars a head to be there and did not even know why.... they had no idea that they were being used by the corporations just as a shell of a body. Their presence was blocking the inclusion of dedicated Americans who wanted with every fiber of their being to just be in the room.

After the heart break of not getting in to the hearing after a day of travel, as I am sure hundreds felt, my friends and I decided to wait in case some people left the hearing, as we would then be able to take their place. My friend was told if she wanted to get in she had to change her shirt that said "I love my life" because it was a message. Apparently you can't love your life in a federal building hearing. She changed her shirt in case we could get in.

We waited. I watched the first panel, (Watch the hearing here) the pro GMO side speak on live stream for nearly 1 hour and 20 minutes on my cell phone. As I sat on the cold stone floor, my heart sank further with every minute. I was later told I could not sit, that it was "an act of protest" so I stood again and watched the hearing with shooting pain in my feet.
I saw the entire council panel speak favorably of GMOs and deny concern over health safety. I saw our representatives completly sold out on GMOs. I saw the Tennesse Senator (in red) say she "is interested in food looking good because we eat with our eyes... and I am interested in yield." She later left  during first panel. I tried to talk to her as she passed by me. She was immediately angered. I asked her to look up the studies on our Momsacrossamerica.com and told her our kids were sick and she walked away faster. I was again so disappointed.
.
My battery ran too low for me to continue watching. I was distraught that we had come all that way and were missing it. We were told the first panel had left and the second panel had started but no one had left the hearing. It was most likely none would.
It was 12:30.We had been there for 4.5 hours. We reluctantly decided to leave, eat lunch and meet with our fellow activists at the nearby church gathering. There I reconnected with wonderful people from all over the country. 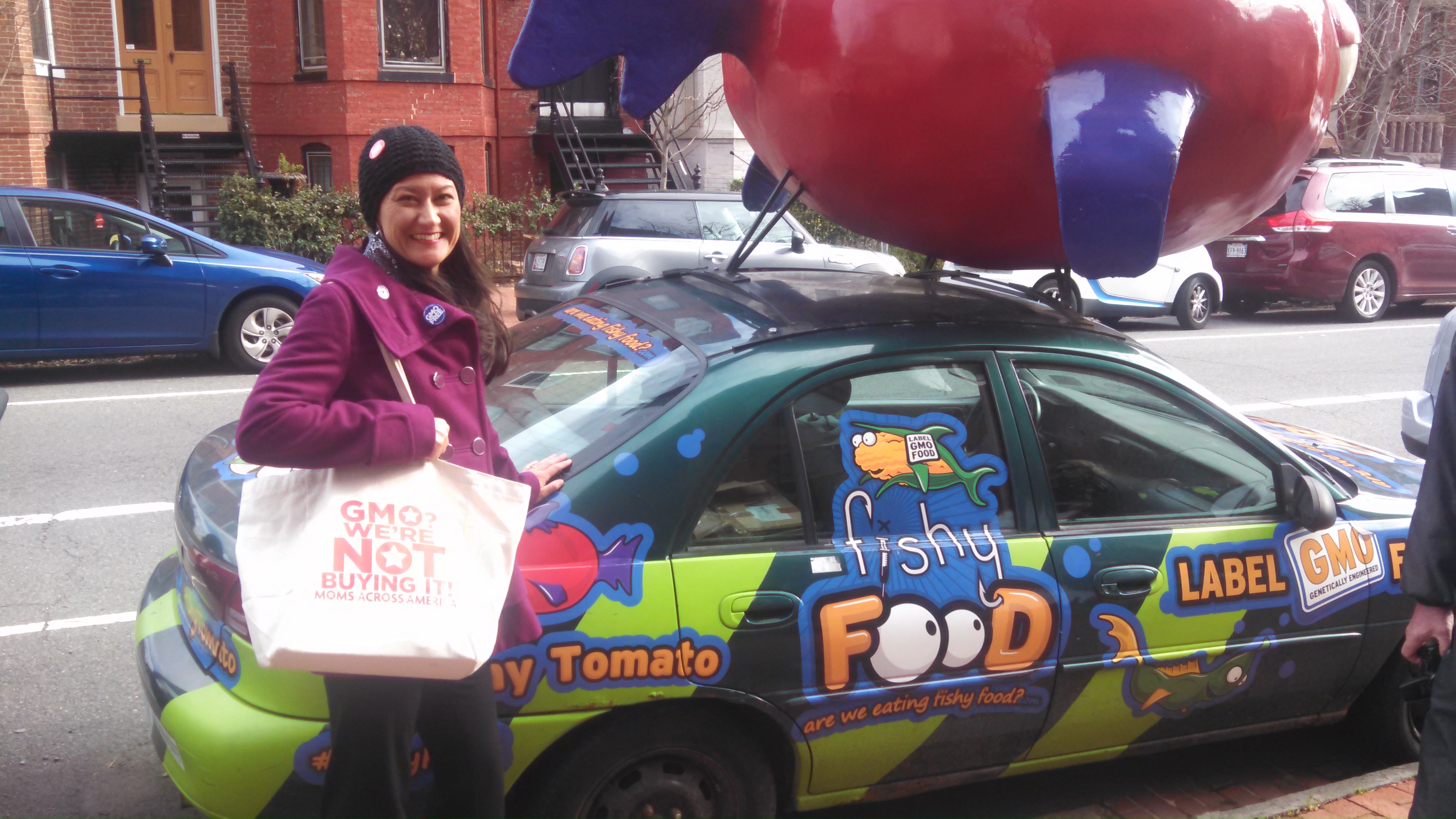 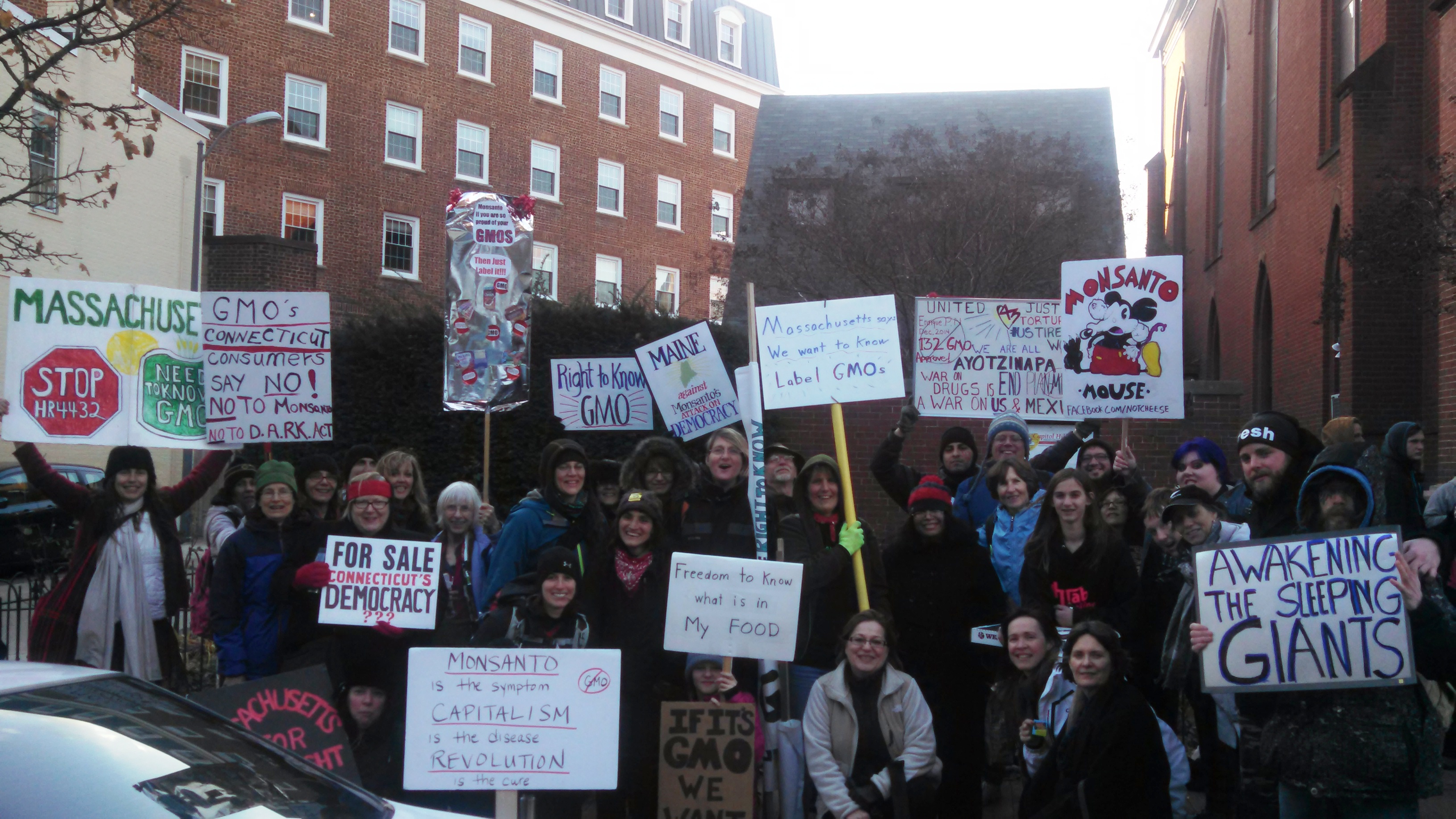 I had an opportunity to address the crowd (see speech here) and request that they take action in their own counties. The response was resoundingly positive. We were not going to give up. I was enlivened and thrilled to meet leaders from all across the country. Their excitement touched my soul and their dedication left me inspired. 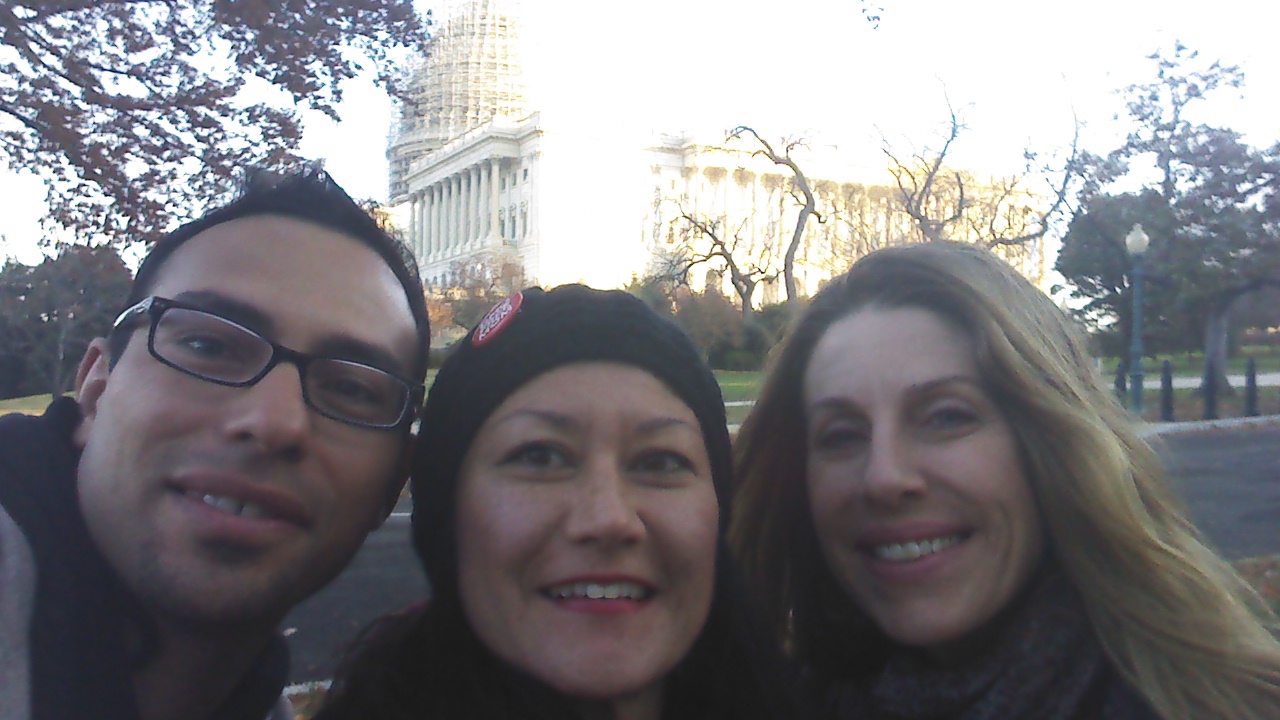 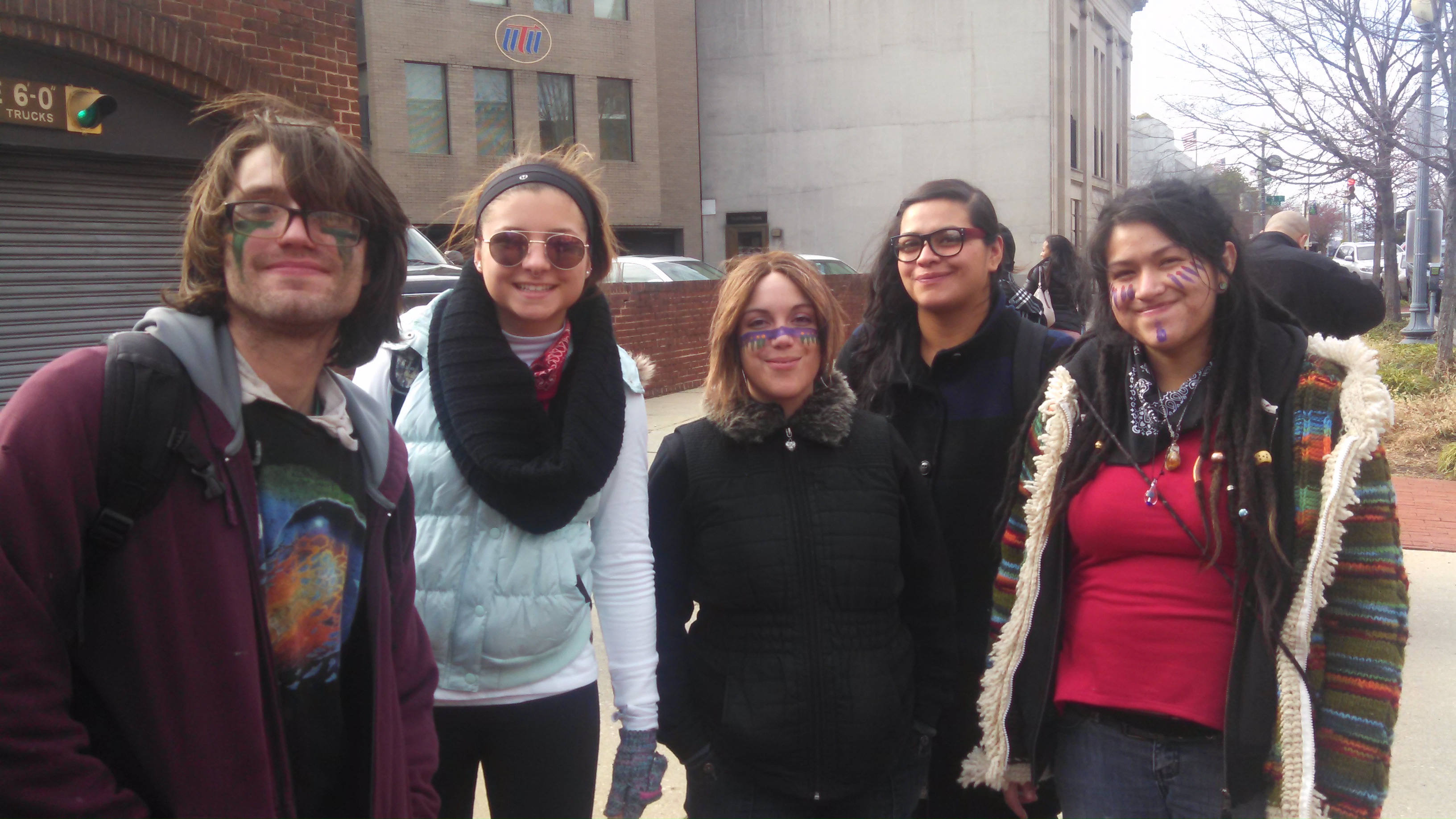 Later, after dinner, I watched the second half of the hearing and my expectations of being represented in the hearing were destroyed. The second panel, I was hoping would be on our side, but it wasn't. It was devastatingly dissapointing. Speaker after speaker just defended GMOs and proclaimed their safety. Even the Vermont co sponsor for the GMO labeling bill and the EWG ( Environmental Working Group) representative clearly proclaimed that they did not have concerns about the safety of GMOs.It was infuriating. I did not hear them speak up to protect our health or state rights. It was a travesty of justice. The hundreds of people who traveled thousands of miles to be there were not fairly represented.

The hearing was set up to be one big propaganda discussion of GMOs.

It was an opportunity for the opposition to scold the EWG.

It was a failure of the US government to protect the people. It is my opinion that the committee members out right lied. I am sure every single one of them is aware of at least one, if not all, of the studies showing harm from GMOs. Every single one of them has heard of the soy comparison study documenting the significant difference between GMO soy and non GMO soy. Every single person in that room was aware of GMO material difference and safety concerns regarding increased pesticides. (Click for link to studies)  It was an appalling example of how corporationshave flat our bought our government.

But this does not mean it was not worth it for every person who came all that way. Our gathering was powerful for us. It was an important act of commitment, generosity and freedom. It galvanized our strength and deepened our appreciation and connection we have for each other. Together, we will be successful. It is time for us to step it up.
It is time for us to stop waiting for other organization heads to speak for us. It is time to stop hoping and start being THE ONE.

I may be disgusted with the system but I will never give up. I don't regret a second of going to DC and I would do it again, earlier, louder and with more supporters. Our efforts in DC are never a waste. Don't use the mess our government currently is in as an excuse not to clean it up. This is OUR COUNTRY!

How can you BE THE ONE in your town? Ban GMOs? Ban Pesticides? Get your school, church or neighbors to switch to organic? Visit with your representatives and congress members and bring them the studies showing harm from GMOs that apparently they never heard of? What ever you do, do something. Because this is our country, our children and our future.

The chemical companies only have power because they have money. And they get their money, essentially from us.

If we don't buy their toxic food, they can't sell it!

It is the actions of all of us, one at a time, that make the many of us strong and undauntable. Together we can do this.

Thank you for your dedication!!!

Special Thanks to OCA for organizing this wonderful gathering of committed people and to supporter Benny Olvera for sponsoring my trip there.