How Do Glyphosate Based Herbicides Contaminate Crops?

For an overview on glyphosate contaminating wine crops watch this 6 minute piece on RT USA with Zen Honeycutt and news anchor Thom Hartmann on The Big Picture marzo 31, 2016.

To learn more about how Roundup has become ubiquitous in our farming and eco system, and why the claims of safety are false, we are honored to have Ib Pedersen, Danish pig farmer's assessment written for Moms Across America below:

Roundup Residues in our Farming Ecosystem

Roundup residues, also known as Glyphosate, circulates in our farming ecosystem and ends up on your plate.

Glyphosate is a problem we will have to face for years to come. The half-life of Glyphosate depends on soil type, pH and other environmental factors and varies from a couple of months, to at least 22.5 years.

This means that Glyphosate is building up in some soils, and glyphosate from this “soil bank” will contaminate our food for the next generation. Although reabsorbed, glyphosate will only contaminate in small amounts, (ppb range).This can still cause problems, as it is not possible to determine the lowest level of toxicity at which a chemical causes cancer, or is teratogenic.

Over a 2 year period on my farm, I have observed the effects Glyphosate residues have had on my pigs.

Zen Honeycutt and “Moms across America” have carried out some good and needed tests regarding the levels of Glyphosate in women’s breast milk. Lately, Glyphosate has also been found in, numerous food and cotton products, as well as beer, wine and also people’s urine.

Zen asked me, if I could show how Glyphosate circulates in the ecosystem. The results of the tests, regarding Glyphosate, carried out on my farm are as described below. 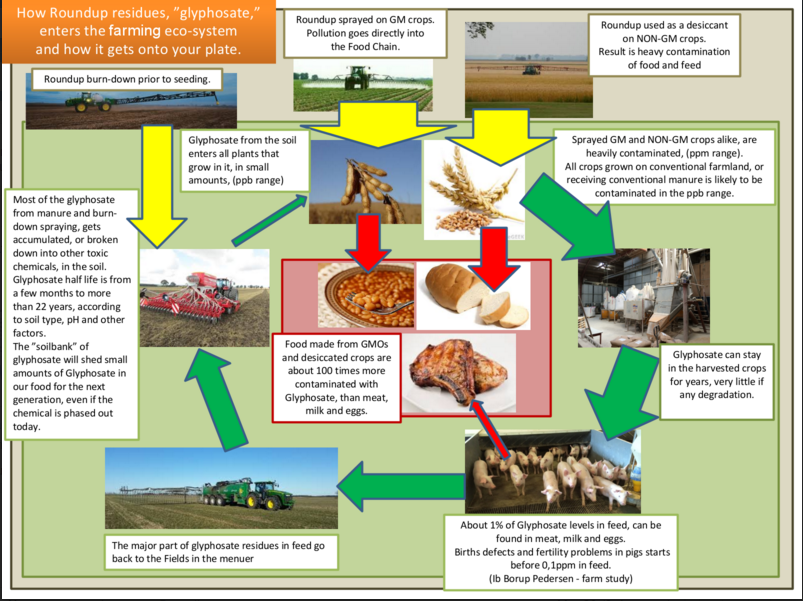 We grow our own grain and we banned the use of Glyphosate based herbicides (Roundup) on our farm, before we started the study, however, when we tested our own grain for glyphosate, we found glyphosate to be present. We wondered where it had come from. In the diagram, you can see the known routes by which Glyphosate enters the eco-system. My observations enable me to put some figures on the amounts circulating in the system:

The only input of glyphosate in my fields is via manure.  The tests show that about 20% of the concentration in the dry feed can be found in the manure and 1-4% in the urine.

*Other studies have shown,  depending on the dose from a single oral feeding, between 30 to 35% of the glyphosate will be retained in the body, with a beta half-life of up to two weeks.  Over that time 14 to 30% is excreted in the urine and up to 69% is excreted in the feces.  Of that single dose, an average of between 0.7 and 1.5% of the glyphosate bio-accumulates and is found in the bones, glands, organs and other tissues.

*** The small amounts excreted are based on 5 urine tests and 2 muck tests on sows eating known quantities of Glyphosate in their diet.

There is also the worrying fact that most of the glyphosate from the feed, according to my calculations, has not gone into the manure.

According to Anthony Samsel, who has seen Monsanto’s unpublished industry studies, Glyphosate is known to metabolize in vivo in both animals and plants, with some of the carbon from glyphosate expired as carbon dioxide through breathing. There are also studies that show that Glyphosate accumulates in the bones, bone marrow and other tissues for weeks or longer.

In the study of my deformed piglets, http://goo.gl/7Sp774 there is also proof that some Glyphosate stays in the meat and organs of the NEWBORN piglets that have been born deformed!!!

My pig observations showed that an average of 0.2 gram / ton in my herd’s feed was quite sufficient to increase the number of deformed piglets born and raise the number of fertility problems. Thus, a relatively low dose of contamination really does count.

A farming friend had problems with chronic botulism in his cow herd. So, to find out if Glyphosate had anything to do with it, he sent in samples of all his feed off for testing. He was surprised to find that silage, cut on his three year old grass field, contained 150ppb = 0.15 gram/ ton glyphosate. You DON’T use Roundup, or other, similar products that contain Glyphosate on grass. This means that for at least 3 years the field has not been sprayed with Roundup, but he had spread slurry from his herd on the field 4-5 weeks prior to cutting the grass for silage. The cows that supplied the slurry had been eating GMO soya and it is unknown if the grain in the concentrated feed had been sprayed with Roundup prior to harvest, the slurry would be polluted more than my pig slurry, due to the GMO soya alone. An old grass field has also got a very established root system that can absorb the nutrients in the slurry very quickly and any glyphosate along with it. So it makes sense that the glyphosate levels in the grass can be much higher than in my grain. At levels of 150ppb, Glyphosate is known to have an antibiotic effect on gut microflora and therefore, it could actually be contributing to the problem of chronic botulism in his cows. Needless to say, he is now very aware of what he feeds his cows. He has switched to using NON-GMO soya and he no longer uses Roundup as a desiccant.

I would wager that farmers, conventional or organic, that use conventional manure on their crops, will have similar levels of contamination, and in extreme cases more than 100 times higher than I have seen in my harvested grain, with regard to manure contaminated with Roundup residues alone.

These levels of contamination are still legal in both EU and USA. In Denmark, if any chemicals like Glyphosate are found in organic produce, the University in charge of risk assessment is contacted and they decide if there is a case of deliberate use of a chemical. If malpractice is confirmed, the organic status is revoked on the produce and the farmer loses his organic status.

USA has a fixed, but much higher legal limit for Organic produce. USA has simply stated that 5% of the conventional maximum allowance is permitted. This makes the legal limit permitted in US organic soya 2 gram/ton, much higher than any figure accepted in Denmark!

These limits are not based on what is safe with regards to the risk of Cancer. In Denmark the limit is set on an individual valuation, according to whether the pesticide has been used on purpose, whereas in USA the limit gets pushed up on the request of chemical companies.

The following link describes the state of American organic crops, some of which have tested at 0.09 Gram/ton, which is nearly 30 times more glyphosate residues than I have found in the grain I used to feed my pigs, but only 2/3 of my friend’s grass silage!!!

Have additives, salts and esters of Glyphosate raised the toxic effects of Roundup?

The very low dose of contamination in my grain is 34 times the amount of Glyphosate that Seralini used in his rat study. (Seralini used Roundup and not just Glyphosate, which is the active ingredient of Roundup). The result of his studies was that, there was found to be four times more tumours and a shorter lifespan, in the rats that had Roundup in their drinking water, than those in the control group. http://www.enveurope.com/content/26/1/14

I used crops sprayed with Roundup, which is the way consumers will encounter it, and I only measured the Glyphosate part and not the additives in the feed.

In today’s Roundup – products, a variation of esters and salts of Glyphosate are used in combination with additives. Using technical glyphosate like Monsanto has done is known to be the least toxic of the three ways of testing.

Monsanto’s studies do not take into consideration that some of the so called “inert additives” are actually able to make Glyphosate mixes up to 1000 times more toxic. These additives were in the Roundup sprayed on the crops that I fed my pigs and they were in the drinking water fed to Seralini’s rats

In reality Monsanto has got away with testing a chemical called ‘technical Glyphosate’ that is not used in the products sold today. The ready mix (Roundup and other brands sold) can have any of 40 known additives mixed in the marketed products. All of the sold products have proven to be much more toxic than “technical Glyphosate”.  This is not accounted for in the safety evaluations.

New research shows regulatory “safe” limits for glyphosate, may not be safe at all http://goo.gl/UX4BKY

In the case of Glyphosate residues, there is only one sane solution:

Abandon Roundup and other Glyphosate based herbicides throughout the world.