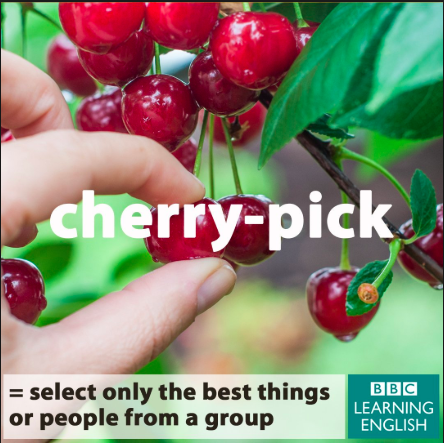 Have you been wondering why many farmers, scientists, and regulatory agencies are claiming that glyphosate is safe? Are you confused as to why our EPA says that they have the science to show that glyphosate is not a carcinogen...but the IARC (International Agency for Research on Cancer) has found that it is a carcinogen? We have!

Thank Goodness that scientist Charles Benbrook has combed through the studies analyzed by both agencies and has found out exactly why they came to their decisions. Guess what... SURPRISE! cherrypicking is definitely at play!

To summarize for you:

EPA cited 109 total assays not included in the IARC report, 87% of which were regulatory studies commissioned by industry, and all but one was negative.

IARC included the results from 67 assays not included in EPA’s analysis, all of which were from peer-reviewed publications, and 82% of which had at least one positive result for genotoxicity.

In genetics, genotoxicity describes the property of chemical agents that damage the genetic information within a cell causing mutations, which may lead to cancer. While genotoxicity is often confused with mutagenicity, all mutagens are genotoxic, whereas not all genotoxic substances are mutagenic.

The following is the full paper by Charles Benbrook PhD. published on www.hygeia-analytics.com Genotoxicity studies cited in EPA’s 2016 “Glyphosate Issue Paper: Evaluation of Carcinogenic Potential” and in the glyphosate chapter of IARC’s 2017 carcinogenicity evaluation “Monograph 112: Some organophosphate insecticides and herbicides” are compared and contrasted.

Key findings are highlighted below. The graphics are available in different formats (see below). 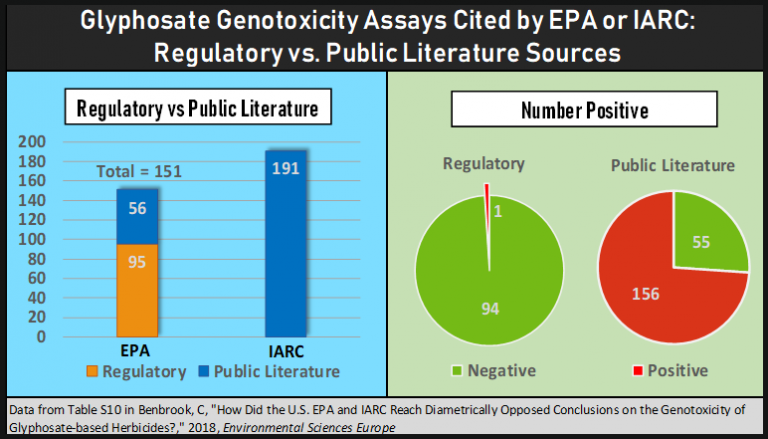 While IARC referenced only peer-reviewed studies and reports available in the public literature, EPArelied heavily on unpublished regulatory studies commissioned by pesticide manufacturers. In fact, 95 of the 151 genotoxicity assays cited in EPA’s evaluation were from registrant studies (63%), while IARC cited 100% public literature sources.

There is also a stark difference in the outcomes of registrant-sponsored assays versus those in the public literature.  Of the 95 regulatory assays taken into account by EPA, only 1 reported a positive result, or just 1%.  Among the total 211 published studies (right circle in the graphic), 156 reported at least one positive result, or 74%! 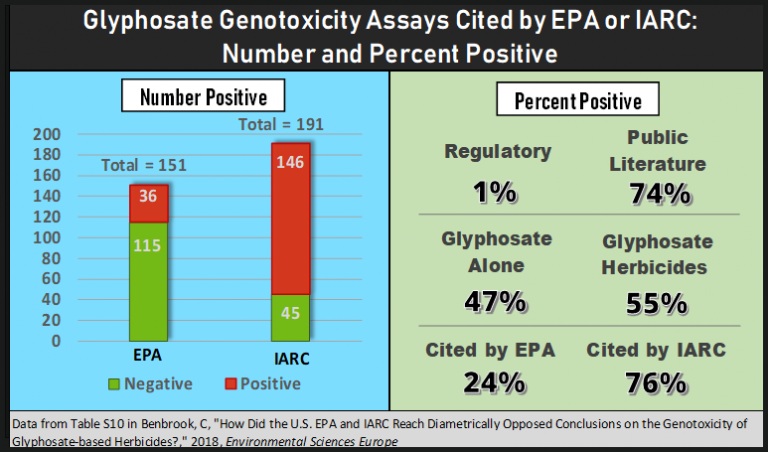 Another important difference is that EPA focused their analysis on glyphosate in its pure chemical form, or “glyphosate technical.”

IARC, on the other hand, placed considerable weight on 85 studies focused on formulated GBHs, the herbicide people actually use and are exposed to (“Glyphosate Herbicides” in the graphic). 79% of the GBH assays published in public literature reported one or more positive result.

While EPA did list studies on formulatedglyphosate-based herbicides (GBHs) in an Appendix F of its report, EPA acknowledges it placed little to no weight on GBH assay results.

This difference is reflected in the overall percent of positive assays.  Just 24% of the 151 assays cited by EPA reported positive results, while 76% of those cited by IARC had at least one positive result. 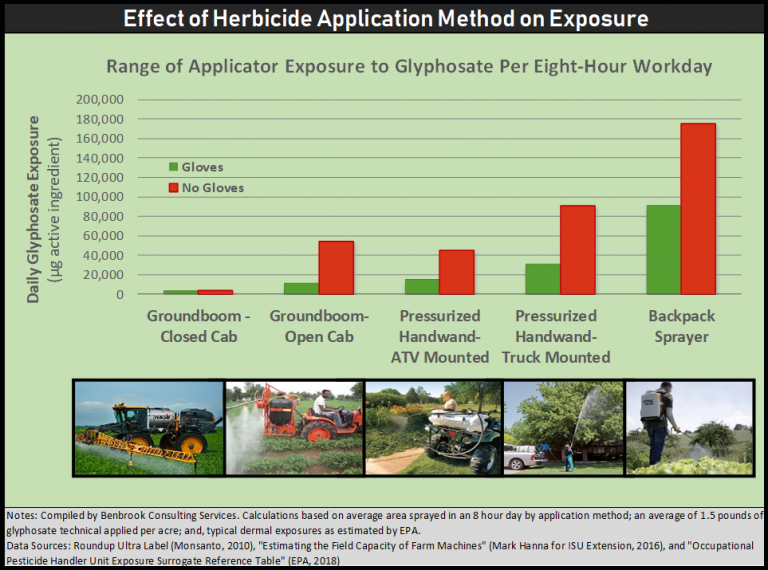 EPA’s analysis was limited to typical dietary exposure to the general public as a result of legal uses on food crops, and did not address occupational exposure and risks.

IARC’s assessment encompassed data from typical dietary, occupational, and elevated exposure scenarios.   Elevated exposure events caused by spills, a leaky hose or fitting, or wind are actually common for people who apply herbicides several days a week, for several hours, as part of their work. The highest exposures typically occur when herbicides are applied with a handheld or backpack sprayer, or an ATV or truck-mounted sprayer.

The equipment used to apply GBHs has a huge impact on applicator exposures, as does whether applicators use Personal Protective Equipment like gloves. The applicator driving the modern, large-scale sprayer pictured on the left might typically spray around 500 acres in an 8-hour day, apply 700 pounds of glyphosate technical, and be exposed to 3.5 milligrams (3,500 ug, or micrograms). The applicator using a backpack sprayer without gloves would apply only about 3 pounds of glyphosate in 8 hours, but would be exposed to around 175 milligrams of glyphosate, 50-times more than the driver of the spray rig. And that driver would spray more than 230-times more glyphosate in an 8 hour day. In virtually all high-exposure scenarios, wearing gloves makes a big difference, reducing exposures by around one-half to one-tenth of “no gloves” exposure levels. The estimated exposures in the scenarios in the graphic represent applications during which everything goes “by the book,” but in the real-world a variety of factors can, and frequently do dramatically increase exposure levels. 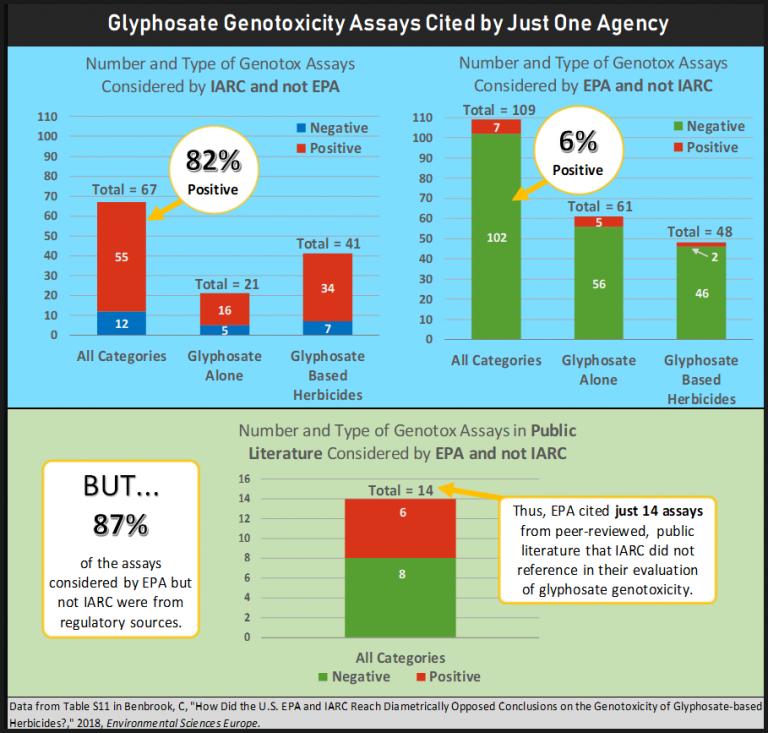 A closer look at the assays referenced by EPA but not IARC, and by IARC but not EPA helps explain why EPA and IARC reached opposite conclusions.

EPA cited 109 total assays not included in the IARC report, 87% of which were regulatory studies commissioned by industry, and all but one was negative.

IARC included the results from 67 assays not included in EPA’s analysis, all of which were from peer-reviewed publications, and 82% of which had at least one positive result for genotoxicity.