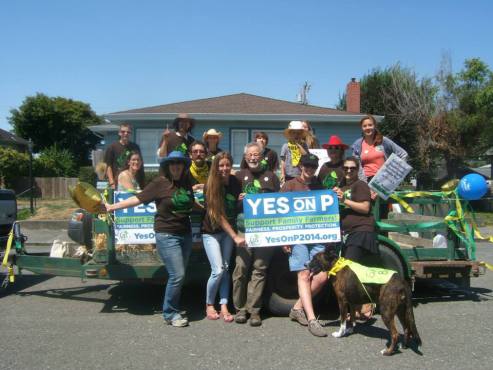 Moms Across America asked the committed activists who  passed GMO FREE Humbolt County CA to please give us their perspective on what makes a successful campaign. When you are wondering "What's Next? with our cause consider working on having a GMO free zone in your county. We are inspired by your commitment and tenacity! Thank you supporters of Measure P!

"2014 was Humboldt County’s second attempt (this time successful) to pass a ban on cultivating GMOs.  Ten years ago, when four other counties and one small city passed their initiatives, Humboldt tried and failed.  Were the results different this time because of greater awareness, a better written initiative with less stringent penalties, or something else entirely?  We simply don’t know. What we do know is that Humboldt has relatively few GMO crops in cultivation, which undoubtedly made the process easier. In contrast Hawaii and Southern Oregon are prime seed-growing areas in which the agrochemical giants have a significant financial interest.  It’s not too surprising, then, that they intervened in a big way to fight the initiatives there, while sitting out the Humboldt campaign.  However, we tried at all times to be prepared for outside money to start flooding in against us, and it’s clear that the campaign played out differently in the absence of big money than it would have otherwise.

Our campaign messaging was entirely local. We focused on the benefits of protecting a niche market for our local agricultural industry (which already has a focus on high-value organic and natural products) and protecting our local environment from the herbicides connected with most GMO crops.  Our opposition came mostly from a small, unorganized group of local "skeptics" who wanted to have a different debate entirely - and whose voices, unfortunately, were disproportionately amplified by the relatively hostile local media. They wanted to use typical Monsanto talking points and argue about the “scientific” basis for drawing conclusions about GMO health effects, the potential for GMO miracle crops to feed the world, etc.  We mostly refused to engage in these debates, however, and often explicitly argued that they were totally irrelevant to the local issue being placed before the voters. 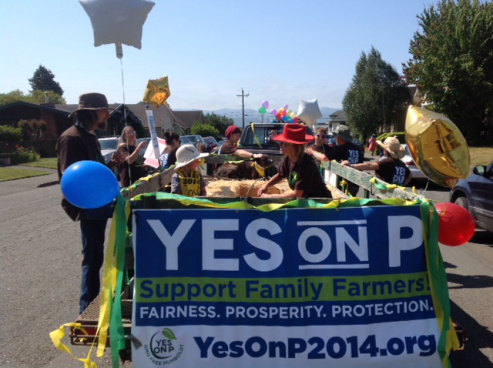 While labeling campaigns have a clear, singular focus, (the right of consumers to know what’s in their food) campaigns to ban GMO cultivation are multifaceted, with health, environmental, and economic aspects.  The challenge is to choose the message most likely to resonate with local voters and stick to it.  Don’t allow the opposition to frame the argument.
Here are some takeaways from Humboldt’s campaign experience:

1.Educate, educate, educate; there’s still not enough awareness of the general issue.  Despite bringing in world-class speakers, hosting radio spots, showing movies, tabling, etc., we still got the occasional question, “What’s a GMO?”  And, while Measure P did pass overwhelmingly, in a county that is pretty progressive and environmentally conscious, 39% of the voters still voted no.

2.Opposition may come from unexpected sources.  Ours came mainly from the past president of HSU (who was also publicly against labeling), one biology professor at HSU, and two organic dairies.

3.Don’t assume that local media will recognize what’s good for the community and be supportive.  For reasons we don’t fully understand, some of our outlets wrote very slanted articles, editorialized for a no vote, or provided forums for the “skeptic” point of view.  That did provide Measure P supporters with ample opportunities for some wonderfully thoughtful, passionate and articulate letters to the editor though.

4.In short, win, lose, or draw these battles are worth doing.  We, The People, do have the power; it just requires commitment and hard work.  Each action spreads information a little more widely, inspires new people, and builds momentum.   Here’s to success in the end!

The Committee for a GMO Free Humboldt/Yes on Measure P"
Questions can be directed to Kay Schaser, [email protected]
Do you like this post?
ツイート