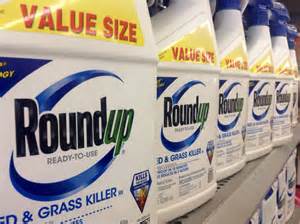 From reporter Carey Gilliam at Reuter's:

The EPA’s office of environmental health hazard assessment in California wants to label four chemicals, including the most popular herbicide and key ingredient of Monsanto’s Roundup, glyphosate (Roundup),  as “known to cause cancer,” following the most recent WHO cancer research division’s report.

The “notice of intent” envisions placing Glyphosate within 30 days to the list of chemicals that are known to cause cancer, classification of which falls under the Safe Drinking Water and Toxic Enforcement Act of 1986, or the Proposition 65. Under the Act any chemicals that threatens human life require a businesses to provide a "clear and reasonable" warning label before exposing individuals to a chemical on the list.

In March the International Agency for Research on Cancer (IARC) classified glyphosate as being “probably” carcinogenic to humans forcing the agrochemical giant Monsanto to furiously reject the conclusions.

Glyphosate, which was invented by Monsanto back in 1974, is a broad-spectrum herbicide used to kill weeds, especially annual broadleaf weeds and grasses known to compete with commercial crops.

To read the rest of her article go here: https://www.rt.com/usa/314544-california-epa-glyphosate-carcinogenic/

To comment on this law change and encourage them to classify glyphosate as a carcinogen, please contact the following:

Written comments must be received by 5:00 p.m. on Monday, 10月 5, 2015 to be considered. We encourage you to submit comments in electronic form, rather than in paper form. Comments transmitted by e‑mail should be addressed to [email protected]a.ca.gov, and should include “NOIL” and the chemical name in the subject line. Comments submitted in paper form may be mailed, faxed, or delivered in person to the address below.

If you have any questions, please contact Esther Barajas-Ochoa at [email protected] or at (916)445-6900.
More info:
http://www.oehha.ca.gov/prop65/CRNR_notices/admin_listing/intent_to_list/090415LCset27.html

At Moms Across America we are thrilled that the CA EPA is considering taking the lead in acknowledging the harm that glyphosate, the most widely used herbicide in the world, is causing to our residents. California has the most toxic water in America, besides Hawaii, as stated in a recent water report due to chemical farming.  We wish our federal EPA would also have the courage to acknowledge the harm from glyphosate and take action.

We want to take a moment to acknowledge the dedicated people at the CA Guild who worked with the Environmental Working Group to propose this classification. It is the courage and commitment of citizens like them who can literally change the world, one state, one country at a time. It is not easy, it is not popular and it is not well paid...but the generosity of these people prevails and we THANK YOU so much!

We also want to thank all the supporters who sent in their tap water, urine and breast milk to test for glyphosate and raise awareness. You can still get your water and urine tested for glyphosate (and soon breast milk) at www.momsacrossamerica.com/action. Please get tested if you can. These new tests are deemed valid by the EPA and will make a huge difference for our cause.

We also ask the federal EPA- if you acknowledge that glyphosate is a "reproductive effector" and "causes liver and kidney damage" on your fact sheet and now a "probable carcinogen" as stated by the World Health Organization, why would you allow glyphosate on our food at all?
Why not protect the people and revoke the license and ban glyphosate from sale or use?

Could it be that our government regulatory agencies feel pressured by the chemical companies?
Does the EPA think the few hundred lawyers who work for Monsanto are more important than the millions of mothers, fathers, children and babies who are sick in America today from toxic exposure?
Does the EPA think that the pressure of the chemical companies is more formidable than the grief from a lost loved one?

1 out of 2 males and 1 out of 3 females are EXPECTED to get cancer today in America. This is NOT normal. This is caused by environmental toxins and we MUST Take action to reduce the exposure of our communities to toxic chemicals.

1 out of 2 children in America have a chronic illness such as autism, asthma, auto immune disorders, allergies, diabetes or obesity. Many of these illnesses are accompanied by inflammation which can lead to cancer and many studies point to glyphosate as a major contributing factor.  Glyphosate is allowed on 160 of our foods by the EPA at levels FAR above what has been shown to destroy gut bacteria and promote pathogenic gut bacteria, which leads not only to leaky gut and a weakened immune system, but to the gut brain connection signaling the brain to create excitotoxins, which cause neurotoxicity. This is where erratic behavior, memory loss, loss of IQ tics and stammering in autistic children or adults with dementia appear. Dementia is now affecting adults in their 40's and 50's. Toxins are destroying the potential of America.

The fact is that our children and loved ones are the collateral damage for a war on bugs and weeds that was fabricated by the chemical companies for profit. Our farmers have farmed for thousands of years before GMOs, without cancer causing chemicals, and they can and are in many cases, farming even better now. Organic and bio dynamic food is more nutritious, better tasting, has less synthetic chemicals if not none, and has a greater yield. See the Rodale Institute 30 year report for more info. We have faith in our farmers! They are ingenious, they can farm as they have for thousands of years, without toxic chemicals.

So yes, while glyphosate is being permitted on our food, which is completely unacceptable, LABEL IT DANGEROUS. Within two weeks labels can be printed and applied. But within 2 months, recalls should be enacted and these products should be removed from the shelves. The spraying of glyphosate as a desiccant and on our food crops should be stopped immediately. The fact is that the longer we allow glyphosate and toxic chemicals to be sprayed on our food, the more we destroy the microbes and nutrients in the soil, promote drought and loss of top soil, reduce the nutritional content in our food, weaken the immune system and impact the health of Americans and diminish the prosperity of our country.
Our farmers have already found alternatives. Look up http://growbetterfood.com/john-kempf/.

We, as families and as a country, cannot afford glyphosate. We cannot afford chemical farming.
Our families are priceless. Our country is priceless.
Let's treat it with honor and respect and stop chemical farming altogether.
The EPA: Do not sell the health and future of America to the most intimidating chemical company.
Be strong, stand your ground, do your job, protect the American people.