Trump: We Can Make a Better Deal 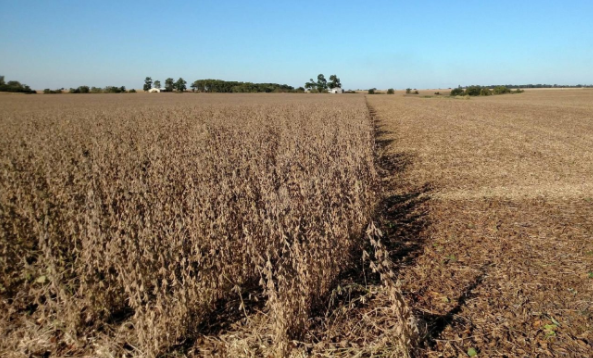 We understand that our administration wants to help the Midwest by having more GMO crops grown and sold to China. Last week, China approved two GMO crops, corn and soy, to be imported from the USA and fed to their livestock only. Now midwest USA chemical companies Monsanto and Dow can sell more GMO seed to China.

Is this really a good deal for America? Or are we risking our national security by poisoning our own country with GMO farming, to feed another? 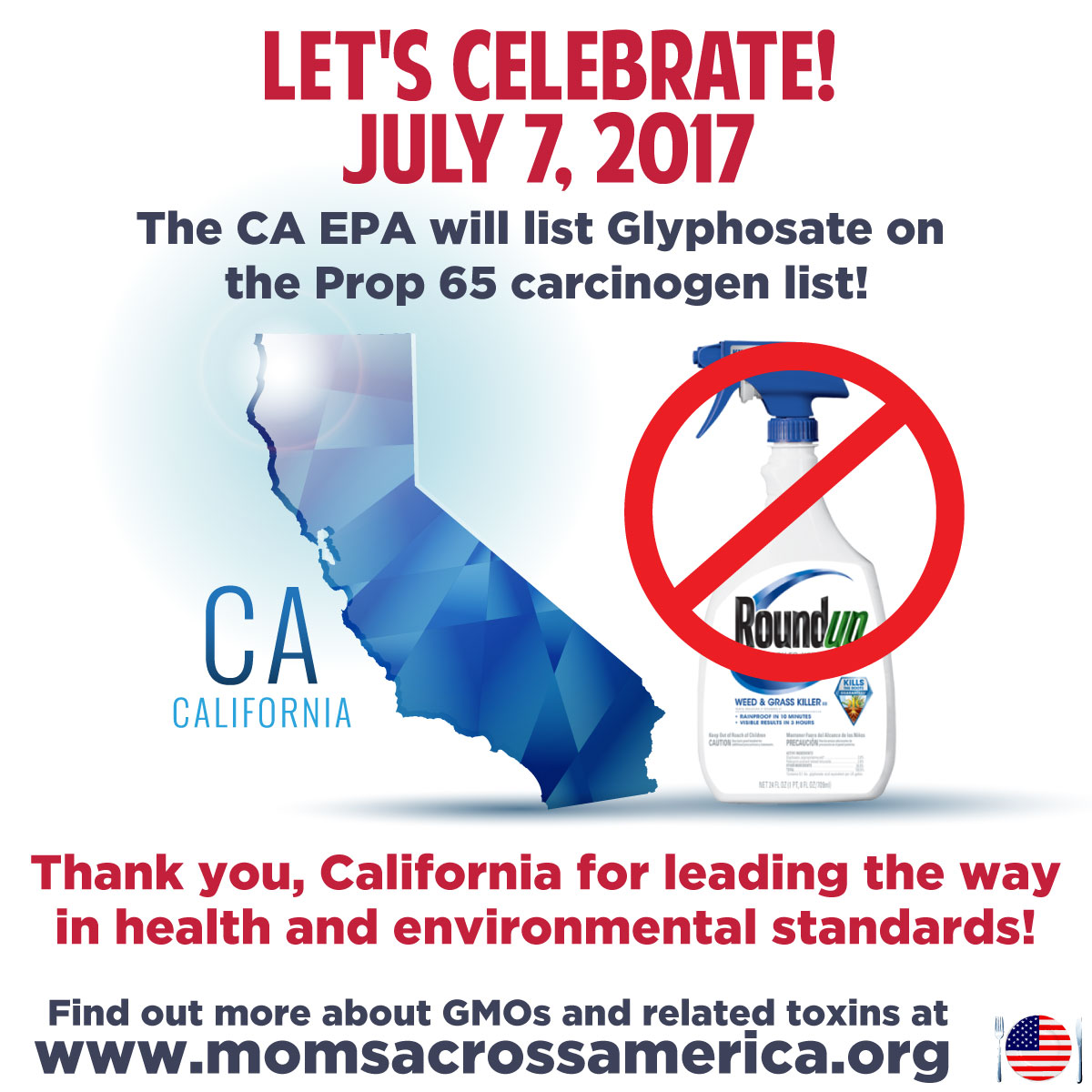 Congratulations to everyone who supported the action of the CA Guild, Moms Across America, and many more to have glyphosate be listed on the Prop 65 carcinogen list! We are extremely happy and proud to share that the California EPA Office of Environmental Health Hazzard Assessment has announced that the Monsanto lawsuit has been dismissed and glyphosate will be listed officially and legally on 7月 7, 2017 on the Prop 65 carcinogen list.
Read the announcement here: https://oehha.ca.gov/proposition-65/crnr/glyphosate-listed-effective-july-7-2017-known-state-california-cause-cancer 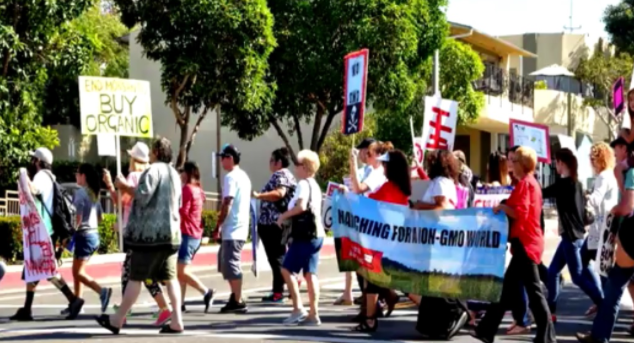 Announcing the debut of our first movie "Communities Rising, A Story of Courage, Creativity, and Contribution!

All across America, everyday citizens are taking action to protect their families from GMOs and toxins.

Monsanto's Roundup Under Fire in CA 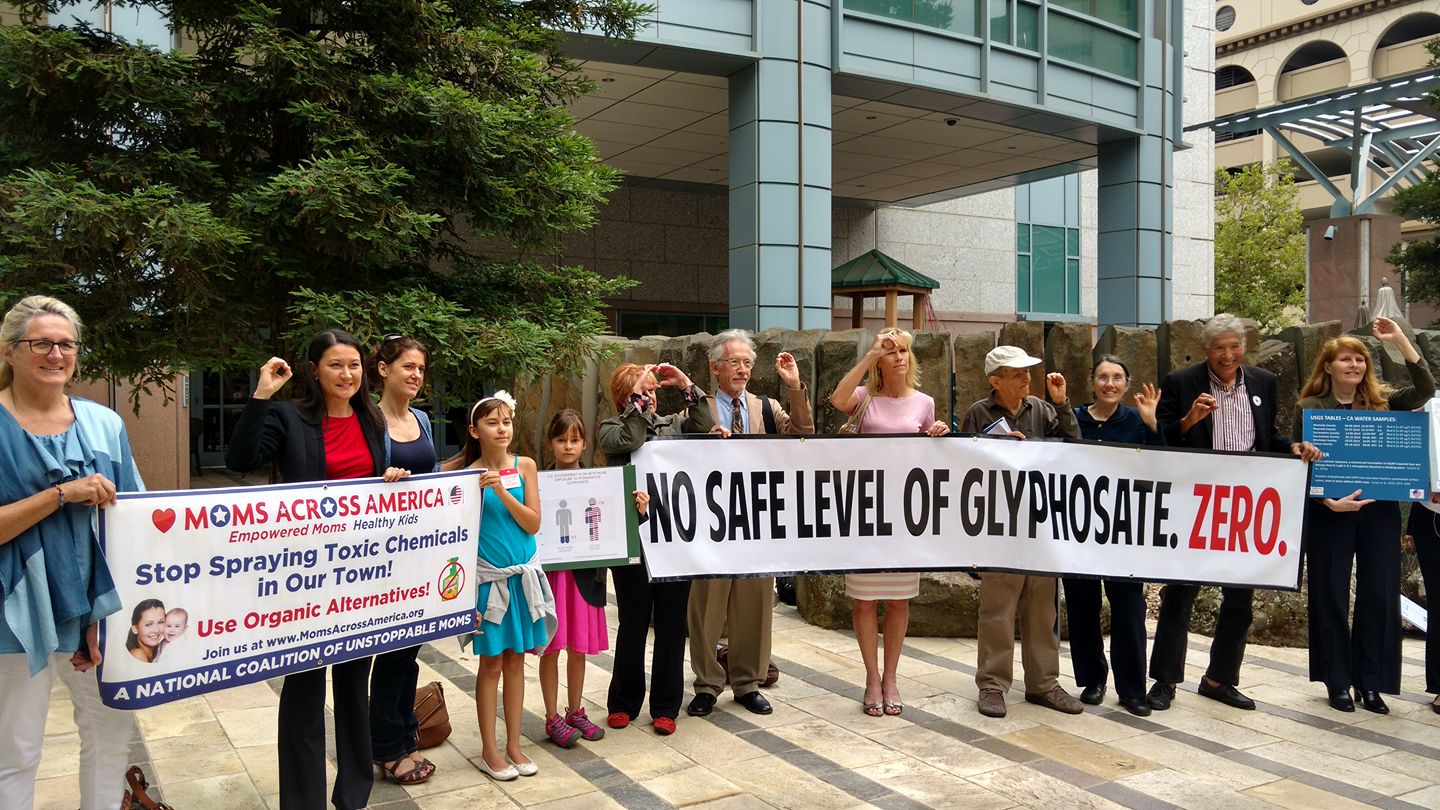 I could not have been more grateful for our community than I was on Wednesday, 6月 7, 2017 at the California EPA Office of Environmental Health Hazzard Assesment hearing for the proposed safe level of glyphosate. At least 100 people attended, 40 of whom spoke from our side against the 5 from Monsanto's side, with clear facts, valid questions, passion, and commitment. Lawyers, scientists, a doctor, many mothers, grandmothers, and plaintiffs of the Monsanto lawsuit for non-Hodgkin Lymphoma pointed out the lack of thorough assessment and faults with the proposed 1100 micrograms per kilogram per day for a 70kg  (154 pounds) adults. Their statements were moving, accurate, and could transform the food supply and health in America.

Watch the stellar news coverage from KPIX CBS and Zen's comments below.

What Level of Glyphosate is "Safe"?

Proposed level is 1100 micrograms No Significant Risk Level (NSRL)  to glyphosate ( an ingredient in RoundUp), on the State’s Prop 65 carcinogen list.  Studies show 1100 micrograms daily to be far too high an exposure level. In comparison chemical 2,3,7,8-Tetrachlorodibenzo-p -dioxin (TCDD), also on the Prop 65 list has a NSRL Of .000005 micrograms per day. Because glyphosate has been shown to bioaccumulate, and has been shown in the parts per trillion, to increase the growth of breast cancer cells, the reality is that there is no safe level.

Can you attend the hearing to support and/or speak on behalf of your family and the public?

NO Safe Level of Glyphosate Exposure to Humans or Animals

Thank you for watching, listening, and sharing!

Article was first seen on Alternet

Investing in a company that sells harmful products like the toxic herbicide Roundup is counter to CalPERS' mission.
By Zen Honeycutt / AlterNet

I was recently informed by a former California public health employee, that CalPERS, the state's pension and health care fund, the largest in the nation, has invested $136 million in Monsanto.

As a California activist committed to healthy communities, I see this investment as a huge conflict of interest. For its health plan subscribers, the CalPERS mission to “advance the financial and health security” of the participants does not align with the detrimental effects of the toxic herbicide Roundup, Monsanto’s number-one product.

The day after finding out about this ill-advised investment, I sent a letter to CalPERS urging it to divest from Monsanto. They have not responded.

Concerned Californians should be outraged by this investment by CalPERS in Monsanto and the harm that inevitably impacts the very retirees CalPERS is responsible to protect. 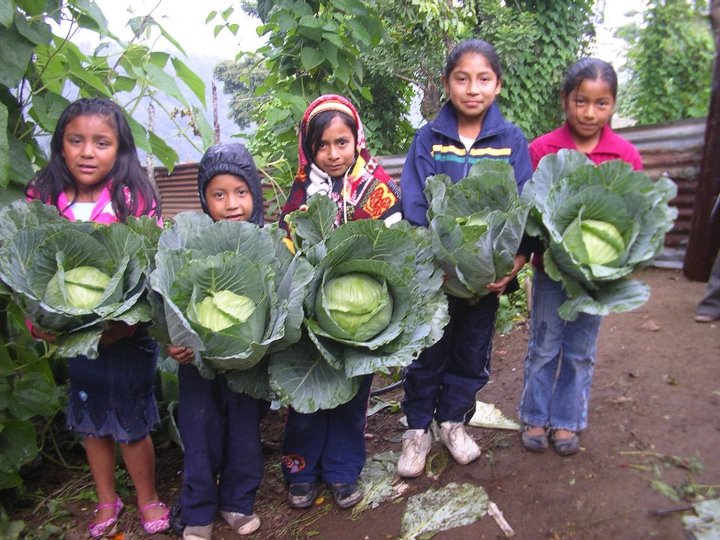 5月 5, 2017 Mission Viejo, CA- Moms Across America releases their report on their recent findings of toxins in 36 American children, tested at Great Plains Lab, along with results from the Canadian Food Inspection Agency(CFIA). The results are disturbing and have an important message for Gluten Free, Vegan and Vegetarian American consumers and food manufacturers.

4月 22 is Earth Day, a day in which we pay tribute to the planet we inhabit. But what are we doing to it? We hear more and more about how our climate is in danger. We hear about all of these international groups calling for a massive reduction in fossil fuels. We hear less about the other causes of the destruction of our climate and one of the largest contributors is factory farming, including the GMO crops and the toxic pesticides used.