1月 26, 2018- Moms Across America and National Health Federation, with  Tips & Associates, filed an Amicus Brief, which is a friendly filing in support for California State Office of Environmental Health Hazards Assessment agency (OEHHA) & their Prop 65 State Toxics List AND the addition of glyphosate to the List, after Monsanto and 11 State Attorneys General  moved to get rid of Prop 65 and the Listing ENTIRELY.

What is an amicus brief?

Amicus briefs are legal documents filed in appellate court cases by non-litigants with a strong interest in the subject matter. The briefs advise the court of relevant, additional information or arguments that the court might wish to consider.

Why would an amicus brief be filed?

Monsanto has repeatedly sued the CA EPA's OEHHA, to remove glyphosate from the Prop 65 carcinogen list. This time they "won the support of 11 states to sue OEHHA." This was coincidentally after Moms Across America initiated a "50 States Ask Governors to Ban Glyphosate" campaign.

The 11 states who join Monsanto in this audacious lawsuit against OEHHA, our state's health hazard assessment agency,  are supporting the federal lawsuit, Monsanto, the National Association of Wheat Growers and other agricultural groups which was filed in 11月 2017, to stop California from becoming the first US State to require product containing glyphosate carry warning labels.

OEHHA legally and rightfully placed glyphosate on the list after the International Agency Research for Cancer (IARC) classified glyphosate a probable carcinogen in May of 2015. Glyphosate is the declared active chemical ingredient in Roundup and over 700 other glyphosate-based herbicides, the most widely used type of herbicide in the world.

Why would Monsanto want glyphosate off the Prop 65 list?

Clearly, having the chemical glyphosate, that they patented for use as a weedkiller and as an antibiotic, is also pending approval by the EPA to be relicensed for the market on the Prop 65 list as a carcinogen, is a problem for business. Home owner's association, school districts, cities, counties and countries around the world are banning glyphosate from use due to the listing by IARC as a probable carcinogen and the CA EPA's listing on the Prop 65 list as a carcinogen. 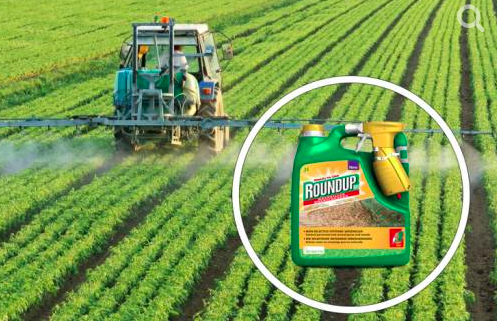 Supporters of the lawsuit cite the industrial farming use of glyphosate on their crops, either as a weedkiller or as a drying agent before harvest, to speed up the process.  They claim that the listing of glyphosate on the Prop 65 list will affect their sales, so theoretically, OEHHA is supposed to take that into consideration and remove the listing.

Moms Across America, scientists, and doctors around the world now link glyphosate to the skyrocketing increase of wheat allergies and intolerances along with the 400% increase of many types of food allergies, some of which are life-threatening.

If they did get glyphosate off the CA Prop 65 list, what then?

Then Monsanto would still have the problem of glyphosate being on the IARC list as a probable carcinogen....so...

The House Of Representatives on the Committee on Science, Space, and Technology  are aggressively working to defund US tax dollar support for internationally recognized World Health Organization's Scientific body, IARC, undoubtedly with support or pressure from Monsanto, in hopes that if IARC is defunded and dismantled, that the glyphosate listing will no longer stand. Chemical companies and their congress member cronies see no benefit to them to have health regulatory agencies assess whether or not pesticides/herbicides sprayed on our food and communities are a public health hazard.

The public, however, who are informed about the dangers of glyphosate, feels very differently. Millions around the world have been marching, calling elected officials, testing foods and other substances for glyphosate and having their communities leaders, towns, counties, and countries stop the use of glyphosate and use alternatives instead.

In fact, mothers Anne Temple and Zen Honeycutt of Moms Across America will attend the Monsanto shareholder meeting 1月 31, Wednesday 2018 and speak on behalf of mothers and John Harrington Investments, who call for Monsanto to correct the harm they are causing the public. Zen will ask the shareholder to vote for a proxy for Monsanto to form a Human Rights Committee to assess whether human rights are being violated, to cease such violations and mitigate subsequent harm to the company and employees.

One of the 11 categories of human rights violations listed is "Attack on Democracy," a prime example being attempting to obstruct justice with frivolous lawsuits such as the current one against the CA EPA's OEHHA for listing glyphosate as a probable carcinogen.

One can read the document they are submitting to the Monsanto board in support of a Human Rights committee here.

Read the entire NHF and MAAM amicus brief, with 26 pages of argument why Monsanto's request for glyphosate to be removed from the CA Prop 65 list is inappropriate here.

What does OEHHA have to say about this?

OEHHA previously said it stands by the decision to include glyphosate on the state’s list of products known to cause cancer, as required under a rule known as Proposition 65.

“Proposition 65 is 30 years old and for every one of those years there have been strenuous attempts to kill it on the ground that it’s different from other states,” said David Roe, the rule’s primary author.

Moms Across America wishes to thank the team of NHF